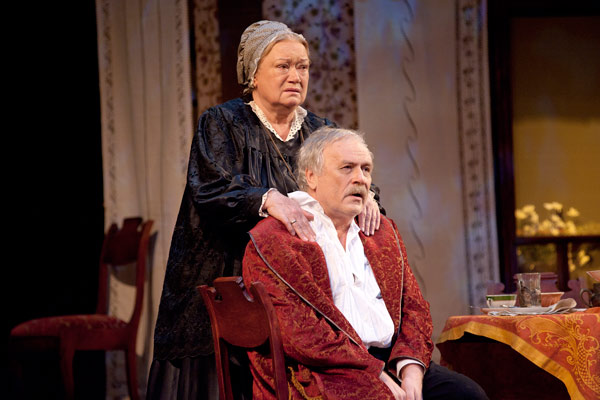 Maly Theatre presents the production of Sergei Naidenov’s play «Vanyushin's Children».Naidenov was a pen name of Sergei Alexandrovich Alexeev, Russian playwright, the son of a merchant, who was well acquainted with the way of life of Russian tradesmen. His characters are different from the inhabitants of the Moskva River, those we generqally encounter in Ostrovsky’s plays. His heroes are people who can reflect both on personal and social moral issues and responsibilities.

The protagonist of the drama is a man who has lived a long life and who is constantly thinking about his children’s fate and how they will continue living with him and after his death without him. He genuinely cares for his children, but, unfortunately, doesn’t get any feedback from them. They are searching for their own new path.

When the play was produced in 1901 by the famous provincial director Nikolai Sinelnikov at Korsh’s theatre, it won Naidenov instant fame and critical acclaim and was widely produced throughout the provinces. Naidenov’s characters were as popular as Chekhov's. These are young people looking for their own path in life, they are tired of the stagnancy that surrounded their parents –theme that was very relevant for that time. Director Vitaly Ivanov managed to find something else in Naidenov’s work…Family issues and dramas that are still relevant today. The audience will have a chance to decide whether the play, written over 100 years ago is still modern…

Alexander Egorovich Vanyushin, a merchant, member of the City Council Recipient of the State Prize and the Prize of the Russian Federation Government , People's Artist of Russia Boris Nevzorov

Arina Ivanovna, his wife Recipient of the State Prize of the Russian Federation Government, People's Artist of Russia Lyudmila Polyakova