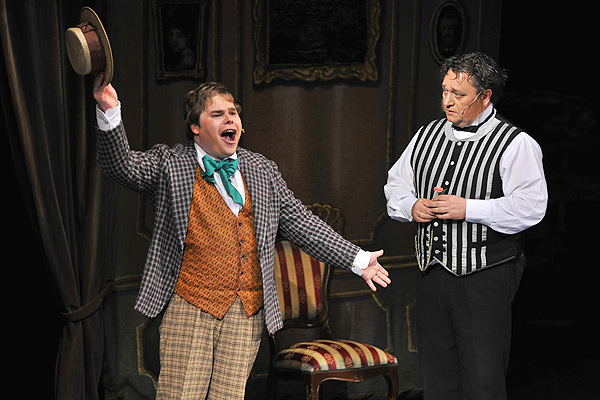 Vaudeville as a genre of variety and family-oriented entertainment and one of the predecessors of the music-hall and musical was especially popular in the United States and Canada from its rise in the 1880s through its demise in the 1930s. It was brought to Russia from the French theatre and enjoyed much success with the public.

The audience always loved this genre for its democratic features and entertaining qualities whereas serious and enlightened tragedy and drama lovers scorned it for being “hollow” entertainment for an undemanding taste. For many decades vaudeville was practically banished from the Russian stage but today Maly brings the undeservedly forgotten genre back to the theatre. One of the best works by a remarkable playwright and actor Pyotr Karatygin entitled «The Eccentric Deceased or a Mysterious Chest» that was written in 1843 and is now staged by Maly Theatre’s Artistic Director Yuri Solomin.

Dupre, a notary officer Recipient of the Prize of the Russian Federation Government, People's Artist of Russia Alexander Klukvin