Vladimir Mikhailovich Beylis, People's Artist of Russia, State Prize of the Russian Federation laureate, was born on April 25, 1937. In 1967 he graduated from the department of directing of the Russian University of Theatre Arts (GITIS) (workshop of M.O. Knebel). A talented director, with a bright and original creative style, Vladimir Beylis immediately has taken a rightful place at the Maly State Academic Theatre of Russia, having earned the unconditional trust of his colleagues. This was partly due to the fact that while being a student, he put on several notable stage productions all over the country that were a success both with the audience and the cultural community.

The outstanding sense of style and genre, rich imagination and incessant creative energy, the highest professionalism and extraordinary efficiency of the young specialist have encouraged the Ministry of Culture of the Union of Soviet Socialist Republics (USSR) to send Vladimir Beylis to Ulaanbaatar (Mongolia) in 1971 as the main director of the Theatre named after Kh. Natsak Dorzh and the head of the theatre workshop for students of the Mongolian State Pedagogical University majoring in directing and acting.

Being a man of actions and having an unstoppable thirst for creativity, Vladimir found a new place for artistic expression on TV and radio, where he staged «Mother Courage and Her Children» by Bertolt Brecht, «My Friend» by Nikolay Pogodin, «The Tale of the Young Spouses» by Evgeny Schwartz, «Smart Things» by Samuil Marshak and many others.

Upon his return from Mongolia in 1975, Beylis returns to the Maly Theatre. All his productions on the stage of the oldest drama theatre in Russia, have become true hallmarks of Moscow’s cultural life. «The Man and the Globe» by Viktor Lavrentiev, «The Engineer» by Elena Kaplinskaya, «The Hurricane» by Anatoliy Sofronov, «Vertigo» by Gevorg Sarkisyan, «The Choice» by Yuri Bondarev, «From the Memories of an Idealist» by Anton Chekhov, «A Profitable Position» by Alexander Ostrovsky, «Predators» by Aleksey Pisemsky, «Tsar Peter and Alexei» by Friedrich Gorenstein, «Tsar Boris» by Aleksey Konstantinovich Tolstoy, «Talents and Admirers» by Alexander Ostrovsky – all these productions have attracted a lot of attention and fascinated audiences and critics alike. Vasiliy Bochkarev was awarded the State Prize of Russia for Best Leading Actor in «Tsar Boris».

«Secrets of the Madrid Court» by Eugène Scribe and Ernest Leguvé that was staged by Beylis in 1997 can be called a true stage phenomenon. This production enjoys tremendous success countrywide and has been played over 600 times. Another great example of Beylis’s brilliant work is «Enough Stupidity in Every Wise Man» by Alexander Ostrovsky, a triumphant production that received the State Prize of the Russian Federation in the field of Culture in 2006.

It should be also mentioned that Beylis fosters creativity and innovation putting on a lot of performances based on the works by contemporary authors. He staged «Chronicles of the Palace Coup», a historical play by Galina Turchina, as well as the extremely topical and at the same time a very philosophical thriller «Happy End» based on Stephen Sondheim and George Furth’s play «Getting Away with Murder».

Vladimir has been fascinated by foreign drama lately. In 2008 he staged a tragedy by Luigi Pirandello «Henry IV» (it was played under the title «Mad, Mad Henry» at the Maly Theatre). In 2011 Beylis produced «The Heirs of Rabourdin», the only comedy by the French novelist Émile Zola. In 2013 he directed «How to Сheat the State» (The School for Taxpayers) by Louis Verneuil and Georges Berr and in 2015 «Eight Loving Women» by Robert Thomas.

One of his productions, «Vassa Zheleznova. The First Version» by Maxim Gorky, starring Lyudmila Titova as Vassa, has become a notable event in the cultural life of Moscow. «It is an authentic Russian psychological theatre that might seem boring and outdated to someone, but at the same time it brings excitement, powerful emotions and food for thought. In this production of «Vassa Zheleznova» there are no riddles, everything is true-to-life and simple...» (Natalia Staroselskaya," Strastnoy Boulevard, 10», №1-191 / 2016).

Beylis also put on a number of productions on the stages of other Moscow theatres: the Central Children's Theatre, the Lenin Komsomol Theatre, the Stanislavsky Drama Theatre and others. Vladimir’s cooperation with the Gorky Moscow Art Theatre was especially meaningful - «The Trap for the Queen» («Ruy Blas») by Victor Hugo, «The School for Scandal» by Richard Sheridan, «Desperate Lovers» by Carlo Goldoni, «Othello of a District Town» («Sin and Sorrow are Common to All») by Alexander Ostrovsky, «Barbarians» by Maxim Gorky. Among his other productions are «The Maid of Orleans» by Friedrich Schiller (Russian Drama Theatre of Samarkand named after A.P. Chekhov, Uzbekistan), «Marriage» by Nikolai Gogol (The Kazan State Theater of Young Spectators), «One More Time About Love» by Edvard Radzinskiy, «Murderers and Witnesses» by Ya.Volchek, «Where is your brother Abel?» by Julius Edlis (Kirov Drama Theatre named after S. M. Kirov).

Vladimir works abroad a lot: in the USA, in Japan, in the Republic of Cyprus. His productions of «The Cherry Orchard» by Anton Chekhov, «Marriage» by Nikolai Gogol, «The Maid of Orleans» by Friedrich Schiller, «The Suicide» by Nikolai Erdman and many others are among the best representatives of the Russian dramatic art abroad.

In 1985 Beylis started his teaching career at Mikhail Shchepkin Higher Theatre School (Institute), since 1998 he has been the artistic director of the course (together with Vitaliy Ivanov). Beylis has staged a lot of graduation plays. Quite a number of his students joined the Maly Theatre’s company and the rest went to work in other theatres of the country. Since 1985 Vladimir regularly leads seminars and master classes abroad (USA, Argentina, France, Spain, Cyprus, Japan).

Vladimir Beylis and Vitaliy Ivanov coauthored a book entitled «Dialogues and Monologues. Profession: director» that was published in 2009.

Vladimir Beylis also takes active part in community service. He has been a chairman of the Maly Theatre’s trade union committee for over 20 years. He conducted dozens of concerts and meet-the-artist events at the factories, community clubs and military units, fostering art and high culture and Maly Theatre’s excellence.

In recognition of his outstanding achievements and due to the fact that Beylis won the unconditional respect of his colleagues, Maly Theatre’s management entrusted him with the most responsible and honorable post of the company-manager.

Vladimir’s creative destiny attests his enormous contribution to the development of the best traditions of Russian theatrical art, and that he can rightly be called a true artist, who adheres to the highest level of professional competence and commitment.

1970 «The Engineer» by Elena Kaplinskaya (together with Vitaliy Ivanov)

1976 «The Mesozoic Story» by Maksud Ibragimbekov. Directed by Boris Ravenskikh

1976 «The Hurricane» by Anatoliy Sofronov

1980 «The Challenge» by Georgiy Markov and Eduard Shima. Directed by Vladimir Andreev

1982 «The Choice» by Yuri Bondarev (together with Vladimir Andreev)

1985 «From the Memories of an Idealist», stage-version of S.Eremeev based on Anton Chekhov’s works

1986 «A Profitable Position» by Alexander Ostrovsky

1995 «Talents and Admirers» by Alexander Ostrovsky

1999 «Chronicles of the Palace Coup» by Galina Turchina

2002 «Enough Stupidity in Every Wise Man» by Alexander Ostrovsky

2019 «Before sunset» by Gerhart Hauptmann 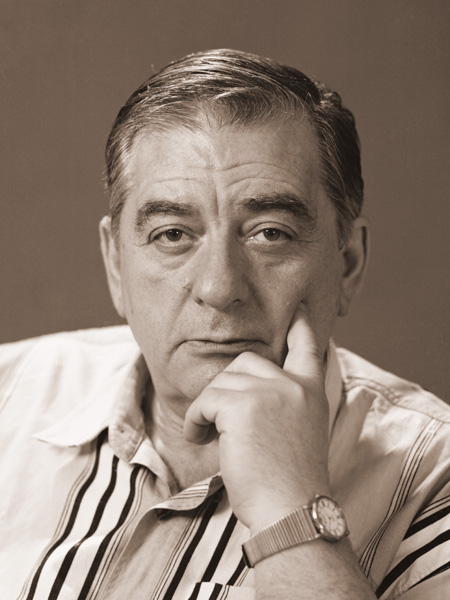