Born on June 18, 1935, in Chita, Siberian Russia, Soviet Union. His parents both were wonderful musicians. His father, Methodius Viktorovich, was a cellist and violinist, his mother, Zinaida Ananievna, was a mezzo-soprano.

Back then Chita was a city of high cultural traditions. The names of Oleg Lundstrem, Nikolai Zadornov, Konstantin Sedykh are associated with the city. The family of Solomin senior was well known in the city. His parents worked as music teachers in the city's House of Pioneers and at the House of Folk Art of Chita.In the late 20s they went to Leningrad, entered the conservatory, where they successfully studied. However, the unforeseen happened. As a result of a minor illness, Zinaida Ananievna got a complication and lost the hearing in one ear. She had to leave the conservatory, and Solomin’s father also left his studies, and they returned together to Chita.

Methodius Victorovich devoted his life to musical talent hunting in Chita, Buryatia. Among the folk talents that he discovered were the excellent bass Lynkhovoin, the performer of Konchak's part in A. Borodin's opera «Prince Igor», and the future director of the opera theatre in Buryatia. Another student turned into a high-class professional musician - Victor Kuleshov, a soloist at the Odessa Theatre of Opera and Ballet, K. S. Stanislavsky and Vl. I. Nemirovich-Danchenko Moscow Academic Musical Theater, at present - the head of the Cossack folk choir.

The main pride of the Solomin parents were their sons, famous Russian actors, Merited Artists, Yuri and Vitaly. From a young age Yuri demonstrated his parents’ artistic heritage. He took part in the performances held in the city Palace of Pioneers. Classroom environment also played an important role in cultivating Yuri’s creativity. Two teachers played a pivotal role in helping young Solomin choose a career. Physics Teacher Roman Mochalov was a talented person who brilliantly played the accordion. Solomin’s first teacher Natalia Bolshakova took good care of her pupils, singling out Yuri’s talents. She followed the successes of her prominent student throughout his career and when Yuri came for a visit to Chita, he never missed an opportunity to see Natalia Pavlovna. He has always been grateful to his school teachers and the support they gave.

Making a career choice is one of the most difficult and most important decisions in a person’s life. It is especially challenging for a young man, living thousands of miles away from major cultural centers. Fate decreed that the Maly Theatre entered the life of young Yuri Solomin from the cradle and remained there forever.

Back in Chita, Yuri saw the film «The Maly Theatre and Its Masters», made for the 125th anniversary of the theatre. Then he learned about Shchepkin Theatre School, and, after graduating from high school, immediately sent the documents to the address: Moscow, Neglinnaya, 6.

Yuri Solomin was lucky enough to study acting under the legendary Russian actress Vera Pashennaya, graduating from Shchepkin Theatrical School in 1957 as an actor. Vera Pashennaya was a brilliant connoisseur of traditions of the Maly Theatre, its values and practices. She became Solomin’s fairy theatre godmother. Her experience along with Maly Theatre’s drama school, established by Aleksandr Lensky, Prov Sadovsky, Alexander Ostrovsky, were extremely beneficial to young Solomin, who quickly absorbed all he was taught – the director’s vision, the personality of the character, involving the spectator into the world of the play.

Vera Pashennaya opened the doors of cinema to Solomin. She was the one who suggested young Solomin for the leading role in Innokentiy Annensky’s film «Sleepless Night» (1959). She also insisted on auditioning Solomin for the role of Prince Bolkonsky in Sergei Bondarchuk’s screening of Tolstoy’s «War and Peace». The role that was later played by Vyacheslav Tikhonov. Later on there were many other roles. Yuri Solomin played over 50 diverse roles in films and on television - dramatic, lyric, fierce, comic, and also played about 60 roles in stage productions, making every single character a real phenomenon. Among his most recognized works are «The Adjutant of His Excellency», «The Road to Calvary», «The Bat», «Dersu Uzala», «An Ordinary Miracle», «TASS Is Authorized to Declare», «Dreams of Russiа», «The Blockade». Those are the roles loved by several generations of spectators in the Soviet Union, Bulgaria, Czechoslovakia, the German Democratic Republic, Japan, and other countries. Among Solomin’s favourite works are the role of Shtube in Alexey Saltykov’s film « It was an Evening and It was a Morning», and the role of Gettel in Victor Georgiev's film «Those Who Are Strong in Spirit».

Being an actor Solomin had a unique chance to work with many prominent directors and actors. He was lucky enough to work and become friends with Akira Kurosawa, Otakar Vávra, Mikhail Kalatozov, Mark Donskoy, Komaki Kurihara, Jeanne Moreau, Marina Vlady.

In his home Maly Theatre Yuri Solomin played over fifty roles of Russian and Western repertoire. Among them - the leading roles in «The Government Inspector», «Tsar Fyodor Ioannovich», «The Deep», «The Wood Demon», «Uncle Vanya», «Cyrano de Bergerac», «The Living Corpse», «The Seagull» and others. Among his beloved roles are Voynitsky in Chekhov’s «Uncle Vanya» and Cyrano in «Cyrano de Bergerac».

There is a curious episode in Solomin’s biography concerning the production of «Cyrano de Bergerac» and People's Artist of the USSR Mikhail Tsarev, who was artistic director of the Maly Theatre back then.

Mikhail Tsarev knew Yuri Solomin ever since the theatre school, he was his teacher. After 25 years of Solomin’s work at the theatre Tsarev asked Solomin what his dream role was. It was both hope and faith in the actor, who proved his right to choose. Solomin replied that he would like to play Cyrano. A year later his dream came true. At the Artistic Council Tsarev proposed to stage «Cyrano de Bergerac» and appointed Solomin for the leading role. Solomin remembers Tsarev as a brilliant director, a great actor and a person, who gave him a dream role. Solomin was lucky enough to work with other legends of Russian theatre school, such as Igor Ilyinskiy and Elena Gogoleva, brilliant actors on stage and great friends in real life.

Since 1980, Yuri Solomin began to work as a director. Since then, he has staged «The Forest» in Bulgaria, «The Government Inspector», «The Seagull», «The Forest», «Intrigue and Love», «The Power of Darkness», «The Youth of Louis XIV» at the Maly Theatre, and several performances at the Shchepkin High Theatre School. He also filmed «The Scandalous Affair in Brickmill» by J.B. Priestley, the three-episode film «The Shore of His Life», «In the beginning was the Word». As a director and actor he worked in Bulgaria, Czechoslovakia, Germany, Japan. He was awarded the prize for his student works in Bratislava (Slovakia) and Kobe (Japan).

Since 1961 Yuri Solomin has been teaching at his alma mater – the Mikhail Shchepkin Higher Theatre School, leads masterclasses for students from USA, Japan, South Korea.

Since 1988, Solomin has been appointed Artistic Director of the Maly Theatre. Over the years, he managed to keep the traditions of the theatre, to create a new repertoire, preserving the plays «Tsar Fyodor Ivanovich» directed by Ravenskikh and «The Cherry Orchard» directed by Elias, to maintain a unique theatre symphony orchestra, theatre staff (over 600 people), including the unique theatre company with the People's Artist of the USSR Elina Bystritskaya, People's Artists of Russia Valeriy Babyatinskiy, Vasiliy Bochkarev, Aleftina Evdokimova, Vyacheslav Ezepov, Yuri Kayurov, Vitaliy Konyaev, Irina Muravyova, Liliya Yudina, thirty Honoured Artists of Russia, and the talented young artists.

In 1990, Yuri Solomin was appointed Minister of Culture during the period of transition from communism, from 1990 to 1992, in the first Government of the Russian Federation. During the 2-year tenure as minister he managed to solve a number of important issues related to the organization of the life of theatre groups, the development of children's creativity.

He prepared and issued a Resolution of the Council of Ministers of Government of the Russian Federation on reorganization of theatre activities that abolished a number of obsolete postulates, norms and rules that hindered directors’ and actors’ creativity that enhanced theatres’ creative activities throughout the country.

Yuri Solomin is People's Artist of the USSR, People's Artist of Kyrgyzstan, Honoured Worker of Arts of the Republic of Mari El, laureate of the State Prize of the Russian Federation, recipient of «Golden Aries» award for his outstanding contribution to the development of national cinema. He is an Honorary Member of the Russian Academy of Arts, a Corresponding Member of Russian Academy of Education.

He has been honoured by multiple awards, including the Order of Friendship of Peoples, Order of Merit for the Fatherland, I, II, III and IV classes, Order of the Academy of Arts of Japan «for contribution to world culture», Order of Honour, Order of the Holy Prince Daniel of Moscow (Russian Orthodox Church), Medal «Glory of Chita»(№ 1). He was awarded «Man of the Year 1998» and «Man of the Year 2008» by Russian Biographical Institute for outstanding achievements in the field of art. In 2011 he was awarded the Japanese Order of the Rising Sun, 3rd class (Gold Rays with Neck Ribbon).

Yuri Solomin met a lot of influential and eminent people during his life. Among them are Queen Elizabeth II of Great Britain, presidents of states, heads of government, outstanding scientists, cultural, sport, art and other outstanding public figures. However, there were some that played a crucial role in his life. They came to his help during his darkest hour, related to a serious disease that he managed to overcome. Yuri Solomin is especially grateful to outstanding physicians: academicians Evgeniy Chazov, Mikhail Perelman, Professor Renat Akchurin, surgeon from Kiev Yuri Ganul, doctors Mezaev and Rozanova.

Yuri Solomin is especially proud of his granddaughter Alexandra, a professional musician. She takes part in concerts in Moscow and London. At home and in the country of Yuri Solomin is surrounded by his family pets - dogs and cats. 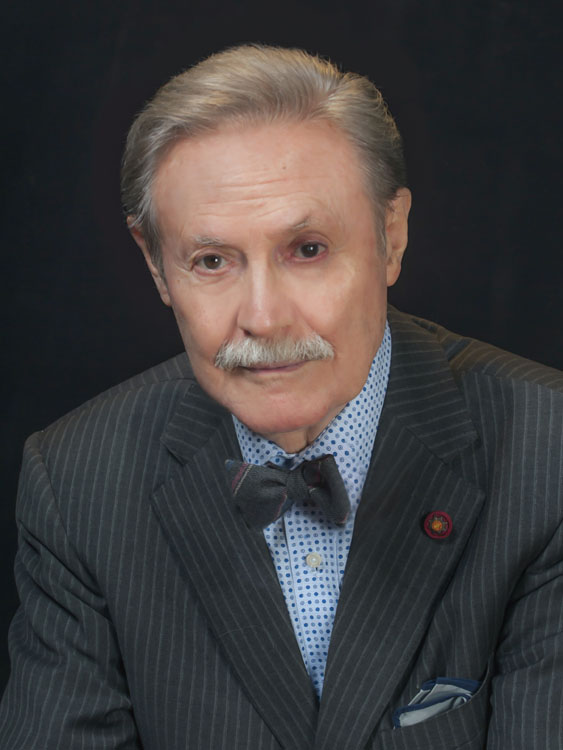 1982 «The Government Inspector» by Nikolai Gogol (together with E.Y. Vesnik)

1996 «The Seagull» by Anton Chekhov (artistic director of the production)

1998 «The Forest» by Alexander Ostrovsky

1998 «Love and Intrigue » by Friedrich Schiller

2003 «The Mysterious Chest» by Pyotr Karatygin

2006 «The Government Inspector» by Nikolai Gogol

2012 «Without a Dowry» by Alexander Ostrovsky (head of the production)

2015 «The Youth of Louis XIV» by Alexandre Dumas, père

1969 «The Adjutant of His Excellency»